From Wikipedia, the free encyclopedia  http://en.wikipedia.org/wiki/Sz%C3%A9kely

For the village in northeastern Hungary, see Székely (village)

The Székely (Hungarian pronunciation: [ˈseːkɛj]) or Szekler people (Hungarian: Székely, Romanian: Secui, German: Szekler, Latin: Siculi), are a Hungarian-speaking ethnic group. They are an ethnic subgroup of the Hungarian nation.[1] Their origin has been much debated. It is, however, now generally accepted that they are either Hungarians, or the descendants of a Magyarized Turkic peoples, transplanted there to guard the frontier, their name meaning simply “frontier guards”.[2] Their organization was of the Turkic type, and they are probably of Turkic (possibly Avar) stock.[contradiction][3] By the 11th century they had adopted the Hungarian language.[3]

Along with the Saxons, the Székely played a key role in the defense of the Medieval Kingdom of Hungary against the Turks [1] in their role as guards of the eastern border. Today they live mostly in the counties of Harghita, Covasna and Mureş in Romania, with a significant population also living in Tolna, Hungary. Based on official 2002 Romanian census numbers,[4] approximately 1,434,000[5] ethnic Hungarians live in Romania, mostly in Transylvania. Of these, about 665,000 live in the counties of Harghita, Covasna and parts of Mureş, with a Székely majority (65%). The Székely therefore account for a significant part (45%) of the Hungarian minority in Romania. When given the choice on the Romanian census between ethnically identifying as "Székely" or "Hungarian," the overwhelming majority of Székely choose the latter. Note that they were not allowed to choose both of them. On the last Romanian census (2002), only 150 persons declared their ethnicity as "Székely".

After the Treaty of Trianon, the Székely population was a target of Romanianization efforts.[6] In post-Cold War Romania, where the Székely form roughly a third of the ethnic Hungarian population, members of the group have been among the most vocal of Hungarians seeking an autonomous Hungarian region in Transylvania.[3]

About 5,000–15,000 Székely live in the former territory of Aranyosszék. Székely villages there include Felsőszentmihály (today part of Mihai Viteazu Commune), or Felvinc (part of Unirea Commune).

Székely people in the Kingdom of Hungary

The Székely were considered the finest warriors of medieval Transylvania. They were part of the Unio Trium Nationum ("Union of Three Nations"), a coalition of the three Transylvanian Estates, the other two nations being the (also predominantly Hungarian) nobility and the “Saxon” (that is, ethnic German) burghers. These three nations ruled Transylvania, usually in harmony though sometimes in conflict with one another. During the Long War, the Székely formed an alliance with Prince Michael the Brave of Wallachia against the army of Andrew Cardinal Báthory, recently appointed Prince of Transylvania.

There are various ideas about Szeklers' ancestry:

The Székely Sun and Moon

The Sun and Moon are the symbols of the Székely, and are used in the coat of arms of Transylvania and on the Romanian national coat of arms. The Sun and Moon symbols represented proto-Hungarian gods. After the Hungarians became Christians in the 11th century, the importance of these icons became purely visual and symbolic. Their original religious significance was lost. The Székely have succeeded in preserving traditions to an extent unusual even in Central and Eastern Europe. The most comprehensive description of the Székely land and traditions was written between 1859-1868 by Balázs Orbán in his Description of Székely land. 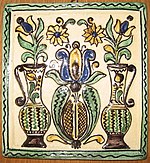 The Székely live mainly in Harghita, Covasna and Mureş counties. They form a majority of the population in the counties of Covasna and Harghita.

The relatively small and isolated Székely population on the border of Cluj County and Alba County (former Aranyosszék) assimilated more significantly during the 20th century than inhabitants of the more concentrated Székely areas. They are estimated to be less than 20,000 today. The Székelys of Bukovina form a culturally separate group with its own history.

Ethnic map of Harghita, Covasna, and Mureş based on the 2002 data, showing areas with Hungarian (Székely) majority

Ever since the abolition of the Hungarian Autonomous Province by the Ceauşescu regime in 1968, some of the Székely have pressed for their autonomy to be restored. Several proposals have been discussed within the Székely Hungarian community and by the Romanian majority. One of the Székely autonomy initiatives is based on the model of the Spanish autonomous community of Catalonia.[8] A major peaceful demonstration was held in 2006 in favor of autonomy [1].

In Bram Stoker's novel Dracula, the eponymous vampire count regards himself as a Székely, and very explicitly presents them as a separate nation from the Hungarians. He describes a history for his people, claiming a descent both from the Huns and also from an "Ugric tribe from Iceland". He even goes so far as to claim that "after the battle of Mohacs, we threw off the Hungarian yoke". However, this version of Székely history owes far more to the imagination of Bram Stoker than to any historical fact. The historical Vlad III Dracula was actually a Vlach leader of Wallachia, and Iceland was never settled by any Finno-Ugric peoples; only Vikings and Irish.

Far more accurate in their depictions of the Székely are the novels of Tamási Áron, a twentieth-century writer from Farkaslaka who set universal stories of love and self-individuation against the backdrop of Székely village culture.

The village of Viscri (German: Deutschweißkirch or simply Weißkirch; Hungarian: Szászfehéregyháza), is part of Buneşti commune in Braşov county and is best known for its highly fortified church, originally built around 1100 AD. It is part of the villages with fortified churches in Transylvania, designated in 1993 as a World Heritage Site by UNESCO. 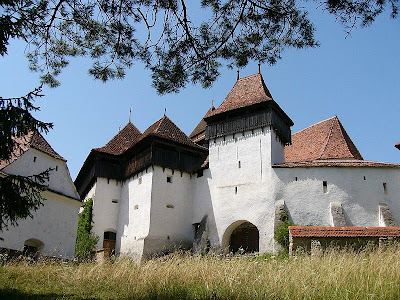 The church was built in the 12th century by Szekely (Szeklers, Hungarian ethnics) colonists and taken over by Saxons colonists in 1185. In the 12th century, that is in the first stage of German colonization in Transylvania, the Saxons had built a Romanesque church, which, having been pulled down by the Tartar invasion in 1241-1242, was replaced by an edifice which has been preserved to the day. 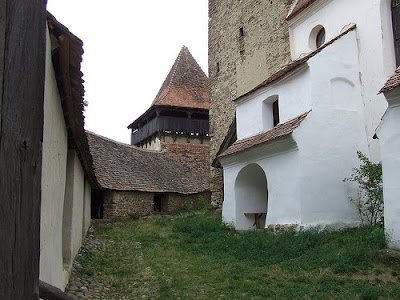 Though small in size, the Gothic Church at Viscri impresses by the grandeur of its walls made of roughly shaped stones. The plan of the former Saxon Romanesque church had been simple, with a single nave, a flat ceiling and a semicircular apse on its eastern side. In the 13th century a keep was built onto the west of the church, the choir was extended eastward and shortly afterward the church was enlarged as far as to the tower. During a third phase of construction at the end of 15th century, the church was converted into a fortified church by adding battlements to the choir and the West Tower. In the chancel one can see what was left of a Romanesque pillar, ended in a cornice capitel (actually the only one known in Transylvania), alongside a triumphal arch left also form the former church. After 1743 a covered corridor for the storage of corn was built. A century later, two chambers in the defense corridor of the bastion were turned into school rooms. The classic 19th century altar has as centerpiece "the Blessing of the Children" by the painter J. Paukratz from Rupea. The font was made from a capital of the 13th century church. The furniture of the Church is decorated with folk Saxon motifs. 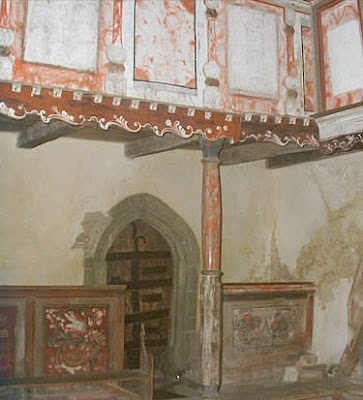 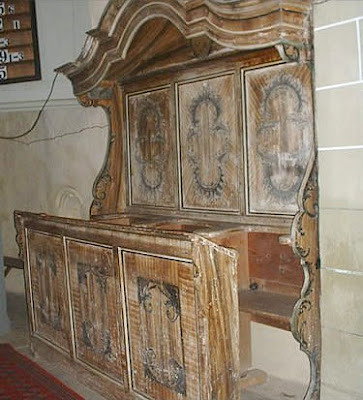 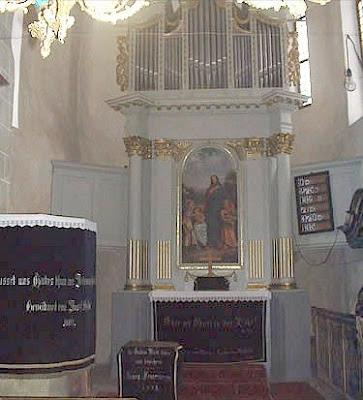 The residence tower alongside its outbuildings placed in an oval enclosure that had once (in the 13th century) been home to the village's headman were actually the core of the Peasant Fortress built in the 14th century, and restored, together with the Church, in the 16th century. The Fortress has two precinct walls. The inner one, provided with four towers and two bastions, has been preserved to the day. On the wall, one can still read that restoration works were made in the 17th century under the guidance of architect Hartmann, and having the following motto ‘In pace de bello et in bello de pace cogitatis'. 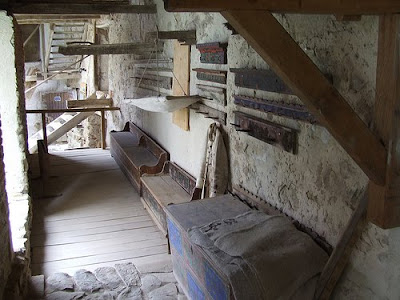 Mention should be made of the covered wall-walk of the fortification, linked to the four towers and to the Church. At times of war, it would allow people's safe moving along within the Fortress. The fortification has a stone arched entrance and four upper levels which can be reached by the wall carved steps. The walls have a depth of five meters which were built from the nearby river's stones. 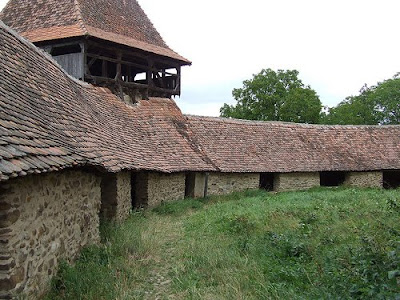 The Church and the Peasant Fortress display three different building materials, namely stone mixed with partially plastered brick for the precinct walls, towers, as well as for the Church's walls and spire; wood used to encircle the precinct walls and the towers, and placed below the cornices and along the bracket corridors; tile which covers the Church's and the towers' tall roofs. Their corresponding colors, i.e. white, brown and red make the buildings' complex look particularly picturesque. To this effect contribute also the Church's buttresses, with lateral entrances to the nave, alongside the very narrow space left between the Church and the Fortress, keeping with the rural styles during the Middle Ages.